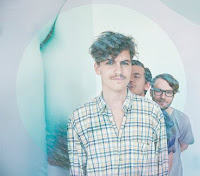 Unless you've been living under a blog-free rock for the past few years, then you are probably familiar with the concept of chillwave, a sub-genre of electronic pop, which one person rather fittingly described as 'someone pouring vaseline over 80s new wave master tapes.' Seems to be that most of the leading lights of the genre, such as Memory Tapes, Washed Out and Toro Y Moi, seem to hail from America.

Thankfully this side of the Atlantic has our own act who can compete with them on the world stage, in the form of Simian Ghost. Hailing from Sweden, the trio mix chillwave influences with smart electro-pop sensibilities.

On the first track from their upcoming mini-album, "Free Agent", the Sebastian Arnstrom and co play up to their retro style, with the song beginning and concluding with the sound of a tape being turned off and on, and the song features seemingly random pitch jumps throughout the song, as it you really were playing the song in 1986 on your elder brother's record player (which I imagine might cause some confusion if someone really does play this track on a record player).

"Free Agent" will feature on Simian Ghost's mini album "Lovelorn", which will be released on November 14th on Heist or Hit Records.

Posted by Christopher McBride at 00:10