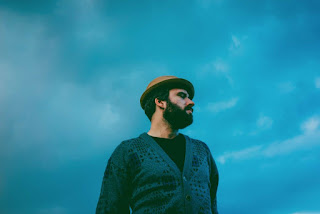 Chris McConaghy, who records under the moniker Our Krypton Son, has been one Derry's more underrated singer-songwriters of the past few years, releasing two well received albums, including the Northern Ireland Music Prize-nominated "Fleas & Diamonds", a giving us some fantastic songs along the way, our highlight being the Scott Walker-esque "Catalonian Love Song", a song that still gives us goose-pimples to this day.

Ahead of the release of a new set of material, he's released a new single which sees Our Krypton Son move in a different direction musically. "White Sun" is produced by Ryan Vail (who won last year's Northern Ireland Music Prize with his collaborative project "Borders" alongside Elma Orkestra), so unsurprisingly the track is an electronic and synth-based, something we haven't really seen in an OKS production to date. Although even with the change in direction, the focal point of McConaghy's vocals remain firmly intact, and as engaging as ever.

"White Sun" is taken from the 3rd album from Our Krypton Son, "Modern Ruins", which is due for release in July.

Our Krypton Son · White Sun
Posted by Christopher McBride at 16:29 No comments:

Email ThisBlogThis!Share to TwitterShare to FacebookShare to Pinterest
Labels: derry, Northern Ireland
Newer Posts Older Posts Home
Subscribe to: Posts (Atom)
The Metaphorical Boat is always on the lookout for new music. If there is any music that you think we should be writing about, or if you are a maker of fine music yourself, then please get in touch:
christophermcbride@outlook.com