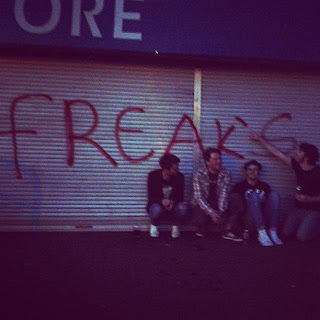 A song that we had been eagerly awaiting for over three years finally made an appearance just before Christmas, although due to being in the middle of December listicals we haven't got around to posting about it until now. Although it's very much worth the wait.

It was way back in 2014 that Strabane based band Freak's first popped on to our radar with their pop-culture influenced indie-pop stylings, with tracks like "Number One" & "A Minute More" tickling our fancy. We had high hopes of them doing well for themselves, however since then they've been quite quiet, very rarely playing live, bar Christmas hometown gigs, and with no new recorded music since.

This was a shame, as one of the songs they played live & on radio sessions "Red Or Green", was one that we really thought deserved a bigger audience, and is one that many of us in Ireland can relate to. Thankfully, just before Christmas, the band finally posted the finished studio version of the song online for us all to enjoy.

"Red Or Green" is a song about youthful memories and the passage of time. The main hook of the song is built around whether between which 5p Tayto Crisps was preferable, either the red bacon flavoured ones, or the green pickled onion ones.*

Unfortunately, Tayto haven't sold Fives for over ten years, as the rolling tides of inflation meaning that it wasn't financially viable to continue selling them. Perhaps if "Red or Green" becomes popular enough, it will act as the catalyst for Tayto bringing back the crisps? At the very least, we hope Tayto will throw those Freak's fellows a few boxes of crisps for the free publicity they've given them over the past few years.

"Red Or Green" is available now as a free download.

*There were also yellow ones, which were cheese flavoured, although these were much harder to come by. Despite what the band have said about these ones publicly, I actually quite liked the yellow ones. Sorry guys!
Posted by Christopher McBride at 16:03 No comments:

Email ThisBlogThis!Share to TwitterShare to FacebookShare to Pinterest
Labels: Northern Ireland, Strabane
Newer Posts Older Posts Home
Subscribe to: Posts (Atom)
The Metaphorical Boat is always on the lookout for new music. If there is any music that you think we should be writing about, or if you are a maker of fine music yourself, then please get in touch:
christophermcbride@outlook.com