The Metaphorical Boat's Top Songs of 2018 - Number One 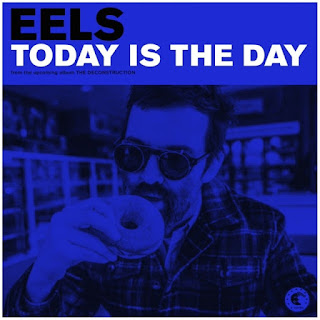 "Today is the day that you see me
As a man who will always change
Who knows the only things to count on
Are life is quick, and life is strange"


And The Metaphorical Boat's favourite song of 2018 goes to a song from one of our favourite all-time bands, joining previous year-end chart toppers like The Vaccines, Bears Den & Public Service Broadcasting. "Today Is The Day" is a song that falls on the 'hopeful' side of the Eels musical catalogue, and is a joyous, uplifting song that really perks you up at the time when you really need it. The music video's pretty great as well, it's a little ball of sunshine, in embedded form.

Posted by Christopher McBride at 16:47 No comments:

We're tantalisingly close to finding out what The Metaphorical Boat's Top Song of 2018, but before we do, let us look at the songs that just missed out on the top spot -


Although the music of Australian duo The Presets helped to formulate my own musical tastes back in 2008 with songs like "Talk Like That" and "This Boy's In Love", in the intervening years I haven't listened to them that much. Until this year that is, when I heard their single "14U+14ME" (pronounced "one for you and one for me, confusingly enough), and fell back in love with them for a second time. It's an heavy electronic track that hooks you in from the moment the beat drops 62 seconds in, and doesn't let up the rest of the song.

The Australian group make a 2nd appearance in this year's countdown with "Don't You Know I'm In a Band". The song sees Sugar Bones take a rare step up to lead vocals, and is filled with the same playful vibes and cut & paste pop that the band have become known for, with lyrics skewing the stereotype of what life as a high-flying musician is like.

The song "Dreamer" by Ciara O'Neill, which listeners to The Metaphorical Boat podcast will undoubtedly know, was inspired by a Sylvia Plath short story from the collection "Johnny Panic & The Bible of Dreams", which is about a woman who is consumed by her inability to share the vivid dreams of her husband.

It a a song that I've heard Ciara play live for a few years, although it wasn't until this year that we got a studio recording of it, and boy, it was worth the wait. The string-swept dark folk song got right under my skin, and stayed with me throughout the year. It's the only song released this that brought me to tears. And I don't have tear ducts.

"Girl" by Brand New Friend is the kind of song that doesn't mess around, and doesn't have a bit of fat on it at all. In less than two minutes, we get two verses, two choruses, a guitar solo, and then both the verse and chorus simultaneously. It is an infectious slice of youthful pop-punk that never outstays its welcome.

Posted by Christopher McBride at 20:27 No comments:

We're in to the top 10, with songs that ranked 10 to 6 on the countdown, as well as a few words on what's so great about each of the songs in question -


I don't really listen to Radio 1 as much as I used to in the past, although given that I wouldn't have discovered such wonderful gems like "Like Words" by Isaac Gracie without it. It's the kind of emotional, acoustic folk that harks back to Nick Drake & Jeff Buckley, as well as more contemporaneous artists like Ben Howard.

Now that Suede have got to the stage of their career where they're no longer chasing radio hits, their albums have become more self-contained pieces of music, without as many songs that you could call "single-worthy", whatever that means in this day and age. That doesn't mean that the albums can't have stand-out moments mind, as "Life Is Golden" can attest to. It's a rather grandiose track, with swelling strings and an anthemic chorus.

It was a long time coming, but after a 7 year wait, we were finally treated to new music from Snow Patrol. The highlight of the new music was "Life On Earth", a slow building emotional blanket of a song, which reminded us a little of "Ordinary World" in places.

Now this is a band that we never thought would appear in one of our year-end countdowns, let alone in the top 10. We had more or less written The Fratellis off back in 2008, when they launched their 2nd album with the honest-to-God, ruddy awful "Mistress Mabel", when even now we think is one of the worst songs ever recorded.

None of their other music released in the intervening period really gave us any hope of getting us back on board, which is why when we bowled over "Starcrossed Lovers", we were surprised to discover it was a song by The Fratellis. It's a brilliant, updated version of the Romeo & Juliet story with a real emotional heart and a little rock swagger. Sometimes, it's nice to be surprised.

George Ezra gets his third, and highest placing, entry in this year's list with the ubiquitous "Paradise". It's hard to underestimate just how much this song turned around his fortunes. After "Don't Matter Now", the lead track from this album, flopped, if this song hadn't gained enough traction he would probably have been dropped from his record label, loyalty be damned.

Thankfully for George, people really responded to "Paradise", it went on to become a monster top 10 hit, and led the way for "Staying At Tamara's" to be the biggest, non-soundtrack album of 2018. And it's a pretty great pop song to boot, so there's that as well.

We're getting closer to finding out what the most popular songs of 2018 have been for us, but before we enter the top 10 here's the songs that made it to numbers 15 through 11 on our list. It's a real international flavour, with four different continents being represented, with Australian baggy-influenced pop and shoegaze, Welsh rock legends, American country music with cliche-killing lyrics, and Japanese nu-metal revivalists -

15. Confidence Man - Out The Window

Posted by Christopher McBride at 13:18 No comments:

We're ascending up the pecking order now, with the songs that have landed between 20 and 16 on our countdown, with songs from an NI electro-popper, a Liverpudlian chill-waver, Macclesfield rockers, a Dublin-based genre-hopper, and Texan alternate-rock -

Posted by Christopher McBride at 21:40 No comments:

Numbers 25 to 21 now, which includes some wonderful British hip-hop, one of the biggest hits of the summer, a satirical take on internet culture, Northern Irish alt-rock, and a Beatles-esque ode to the humble nightclub -

22. Jealous of the Birds - Plastic Skeletons

Posted by Christopher McBride at 15:54 No comments:

We're reaching the halfway stage now, with the songs that ranked 30-26 in our countdown for the year. This section features one of Northern Ireland's best singer-songwriters, some nostalgic dance music, a wonderfully powerful cover of a classic by The Cranberries, and two stalwards of mid-00s British indie-rock -

Numbers 35 to 31 next. In this part, we've got a heartbreaking song about the Orlando shootings, a Scottish purveyor of pop-rock, a sincere cover version of one of the most notable dance records of the 90s, a project by one of the people responsible for the Hamster Dance song and Daz Sampson's Eurovision entry, and a Cork singer-songwriter who also happens to run a podcast with the artist who was #49 in this year's countdown:

Posted by Christopher McBride at 18:52 No comments:

Numbers 40 to 36 are next in this five-song-at a-time countdown. Within the five songs in question is one of the biggest artists of the year with one of his tiniest hits of the year, his brother, one of the finest purveyors of alternative Irish folk, some infectious dance music, and the artist responsible for one of the greatest songs of all time with their own version of a Weezer standard:

Posted by Christopher McBride at 19:38 No comments:

Up next are songs from 45 to 41 in the countdown. This sections includes two top notch local singer/songwriters, Welsh indie-pop, Dutch/Finnish indie-rock, and a song about Belfast's top technological marvel, Titanic -

Posted by Christopher McBride at 11:20 No comments:

Let us begin, as we normally do, with the songs at numbers 50 through 46 in our favourite songs of 2018. The part of the countdown features some noise-rock from the North West of England, English folk, Dutch electro-rockers who aren't fans of orange, Omagh musican-cum podcaster extraordinaire, and Wolverine himself -


Posted by Christopher McBride at 12:05 No comments:

Email ThisBlogThis!Share to TwitterShare to FacebookShare to Pinterest
Labels: Top Songs of 2018
Newer Posts Older Posts Home
Subscribe to: Posts (Atom)
The Metaphorical Boat is always on the lookout for new music. If there is any music that you think we should be writing about, or if you are a maker of fine music yourself, then please get in touch:
christophermcbride@outlook.com