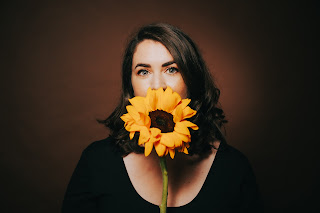 It's been three years since the release of "Arrow", the second album from Northern Irish singer/songwriter Ciara O'Neill, who for our money has one of the best voices of any vocalist from this neck of the woods, and who came on the podcast around the release of that record (and if anyone who heard that podcast was wondering - since then I've finally finished the copy of Norwegian Wood that had been gathering dust beside my bed, although now I've got a copy of Kafka On The Shore to get my teeth into instead).

She's been quiet on the music front in the past year owing to you-know-what, but with better days ahead, she's released a wonderful new song. "Le Soleil" (which translates as "the sun" in French, thank you "B" in GCSE) is a a hopeful song of brighter days ahead, with a rich production that recalls the chilled, lush production of Zero 7 or The Beatles at their most relaxed, all topped off with the wonderful vocals of O'Neill.

"Le Soleil" is taken from the E.P "La Lune" (which means "the moon" in French - once again, thanks GCSEs), which is due for release in the autumn.

Email ThisBlogThis!Share to TwitterShare to FacebookShare to Pinterest
Labels: Northern Ireland, singer-songwriter
Newer Posts Older Posts Home
Subscribe to: Posts (Atom)
The Metaphorical Boat is always on the lookout for new music. If there is any music that you think we should be writing about, or if you are a maker of fine music yourself, then please get in touch:
christophermcbride@outlook.com