There was almost a capacity crowd who came to see Japanese pop-punkers Shonen Knife, with the age of the audience ranging from their teens up to people in their late 50s, which is a testament to the longevity of the band that they can attract fans from across the spectrum. But before we can get to them, we have support from local band The Continuous Battle of Order.

Given how almost diametrically opposed the music of The Continuous Battle of Order is to the sounds of Shonen Knife, I’m beginning to wonder how they were ever chosen to support them. (Incidentally, the weirdest combination I’ve ever came across at a gig was when post-hardcore group In Case of Fire were supported by chiptune girl Chipzel). I’d love to have been a fly on the wall during the discussion between the gig promoters and Shonen Knife’s management:

Management: So guys, I hope you have a fantastic local band lined up as support for Shonen Knife. What are they called again?

Promoter: The Continuous Battle of Order.

M: Oh. That’s a rather dark name for a pop-punk band.

P: Oh, that’s what that letter was? Sorry, I thought that was a bill. Mega lolz. But you’ll love these two guys anyway, they’re quite hardcore.

P: Yeah, there are two fellows in the band, Craig and Hornby. They’re quite talented musicians.

M: Okay, so will these guys be singing about?

M: Yes, singing. The act of uttering a series of words or sounds in musical tones. Will they be singing songs about love, hate, cake, or something in between?

P: Oh no, no, no! These guys don’t sing. They just jam out with 5 minute rock instrumentals, with complex time signatures, the best drummer these isles have to offer, and virtuoso level guitar playing. They are rather good.

M: Sigh. Remind me again why I allow you to choose your own support act?

So we’ve established that these guys are a bit different for a support act (as well as establishing the reason why I’ve haven’t sold a film script yet), but are they worth seeing? The answer, a resounding “yes.” Having only heard the one song by the band before seeing them, “01101111 01101110 01100101” (or for those of us who understand binary, “One”), I can safely say that CBO are a far more exciting prospect live than on record. I have not seen a drummer move his right foot so quickly and with as much force since I saw *insert generic good footballer’s name here*, whilst Hornby was able to produce sounds from his guitar that I only thought were possible using several synthesizers.

The band also showed a sense of self-deprecating humour. Having received a muted reaction from a new song, Craig Kearney joked that “In fairness, that was the first time WE’VE ever heard that song. The music of CBO is not the sort of thing I would listen to all the time, but in a live setting, there is something rather special about them. 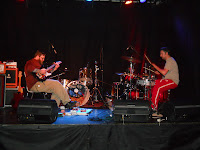 The Continuous Battle of Order, doing their thing.

The crowd rushed to the front of the stage as Japanese female trio Shonen Knife took to the stage for their first ever gig in Belfast, opening with Konnichiwa, then launching into the first track from their latest album, “Perfect Freedom.” I must admit that I have never seen a politer pop-punk band in my time, given that they took the time to extensively thank the audience after each song. 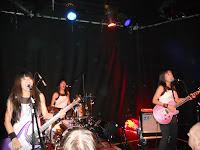 There has always been such a sense of playfulness in the music of the group, with two songs about cute animals (“I Am a Cat” and “Capybara”), and a song about eating their favourite kind of food, “Sushi Bar”, which got the whole crowd singing along. Many of the lyrics are rather daft, but when they come from these girls, it begins to make a lot of sense.

For an encore, the band come back on stage and treat the crowd to three covers of Ramones songs, “Sheena is a Punk Rocker,” “The KKK Took my Baby Away,” and “Blitzkreig Bop,” then exit the stage to a rapturous applause. 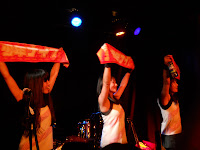 They then showed off their scarves, which were rather nice indeed.

When the late Kurt Cobain was asked about seeing Shonen Knife, he replied: “I was transformed into a hysterical nine-year-old girl at a Beatles concert." Having seen the band live, I can understand where he was coming from. Shonen Knife are a band that make you want to feel young and feel happy, and how can you dismiss music that does that?

Posted by Christopher McBride at 01:10