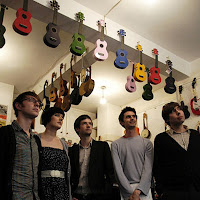 Folk-tinged indie-pop is the order of the day for London based 5-piece Pocketbooks. Taken from their upcoming 2nd album entitled "Carousel", "Promises, Promises" is an ecstatic, dizzy slice of pop, with beautiful vocals and harmonies from Emma Hall. It's music that makes you want to be young and in love again (and if you are already young and in love, then it makes you want to be for longer than you are physically allowed to be).

The song is currently available to download for free, and their 2nd album "Carousel", will be released in September on Odd Box Records.

Promises, Promises by pocketbooks
Posted by Christopher McBride at 17:00