There was a good turnout for Grand Forever’s first Belfast gig, with a near capacity crowd filling Auntie Annies for the duration of the night. And the crowd, many of whom who were still recovering from this weekend’s Forfey Festival, were in for a treat as four diverse groups took to the stage.

“We’re not like the rest of them – we are beautiful and different,” exclaims St. Dave, the lead singer of self-proclaimed t***-rock five piece The Unprotected, during their opening set. And it would be hard to disagree with that. St. Dave, who is dressed for the duration of the gig in hot pants, leather boots and a Tottenham Hotspurs t-shirt, tends to tread the very fine line between endearing and annoying. Thankfully, he really knows how to get the crowd on his side, spending most of the gig running amongst the crowd, being the very definition of the flamboyant front man. 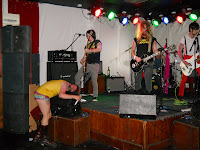 Just when you think you’ve seen everything, The Unprotected have a surprise in store in the shape of Northern Irish music hero Peter Wilson aka Duke Special, who sings co-lead vocals on a very well received cover version of T-Rex’s “20th Century Boy.” Sometimes, there is nothing wrong with being beautiful and different. 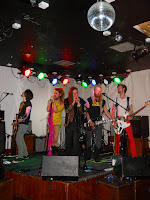 The Unprotected, with the Duke.

With such an over-the-top opening act, the act that followed them had a very difficult task indeed. Thankfully, Captain Cameron more than held his own during his set. Starting out quite folky, his set got increasingly more rock orientated as it went on. Cameron promised that there would be “no cheesy covers” during his set, a promise he later went back on five songs in when his group broke into a cover of Aerosmith’s power ballad “I Don’t Want To Miss a Thing,” which went down very well with the crowd. 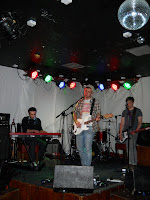 Live favourites The Lowly Knights were next, with the folk-pop sextet more than winning over the local audience. The band utilized a massive arsenal of instruments throughout their set, with synths, mandolin, cello, and the xylophone complimenting the standard bass/drums/guitar combo, which sounded great on songs such as “Even Keel”, “Devotion” (a song that the enraptured crowd sung every single lyric to), and their handclap-friendly closing number “This Other Boys”, which really brought the house down. 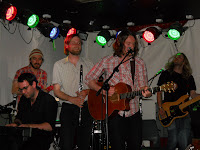 And clarinet. Did I mention the clarinet?
“We’re not sixstarhotel. We’re not General Fiasco. We’re not Two Door Cinema Club,” were the soon to be immortal words that instrumental rock quartet Grand Forever used to mark their debut performance with. And it was very hard to disagree with them on those points. Grand Forever’s dance-rock style proved to be very popular indeed, with tracks such as “Kapillian”, “It Made Me Stand a Little Quieter”, and final track and potential single “Don’t Go Easy on Me” proving very popular during the fast paced set. The set seemed to draw to a close quite quickly, but whether it was due to the relative shortness of the songs or the enjoyability of their performance is anybody’s guess. 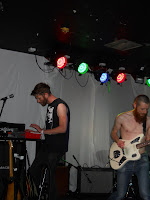 Auntie Annies has long been one of my favourite venues in Belfast, and with great performances such as the ones I witnessed this evening, it’s not hard to see why.

Posted by Christopher McBride at 02:00