The City And Horses - We Will Never be Discovered 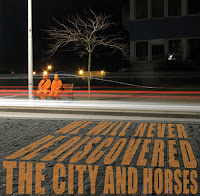 Most bands dream of living the high life, being airwave darlings and having millions of adoring fans screaming their names in a Beatlemania-esque flurry of hysteria. One band that apparantly do not want that is New York 6-piece The City and Horses.

The title track of their upcoming album, "We We Will Never be Discovered", is an ode to remaining in perpetual obscurity. Musically, with it's jazzy flute and it's spoken word verses, it sounds like a cross between Cake's "Short Skirt/Long Jacket" and Focus's "House of the King."

One would like to think that The City and Horses' cries for remaining underground are just an example of reverse psychology to encourage us music fans to scream their name from the rooftops until everone has heard about them. In the case of yours truly, it looks like they may have succeeded.

"We Will Never be Discovered" will be released on September 27th.

Posted by Christopher McBride at 22:44