Conor Owen - There's Only You 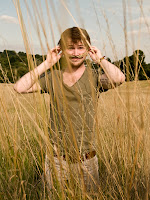 Having toured with The Subways and We Are Scientists in the past, English singer/songwriter Conor Owen knows how to write an anthemic track to get crowds excited. On his track "There's Only You", he sings about hopeless romantic devotion over a pop-folk soundtrack, as it cresendos into a string-laden climax.

"There's Only You" is taken from Conor Owen's debut album "The Observationalist" and is released on September 26th on Kickface Records.