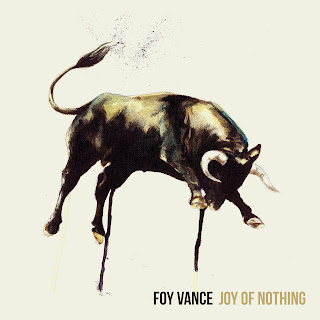 "Joy of Nothing", the new album by Bangor born Foy Vance, has been a long time coming. It's been six years since the release of his debut, "Hope", an album which has had an impact on many up and coming Northern Irish musicians. Just take a look at the influences lists of any artist from here with even the slightest folk tinge - 9 time out of 10, you'll find Mr Vance's name listed.

So with a bigger profile, and thousands of adoring ears awaiting his much anticipated sophomore album, the question is this - "What sort of album will Foy Vance have to offer us?" The answer, at least from this blog's humble opinion, is an album which is designed solely to rile up sniffy, "trendy" music critics.

Evidence for the Prosecution #1 - The album as a whole channels genres and sounds that certain critics just love to take umbrage at, with elements of folk, country, midwestern rock all cropping up throughout the 42 minute run time of "Joy of Nothing".

Evidence for the Prosecution #2 - With its unconventional chord progression, one of the songs on the album, "Paper Prince", seems to be Mr Vance's take on the sound of Radiohead circa "OK Computer". For most critics, especially those of the Pitchfork variety, only one band is allowed to sound like Radiohead, and that's Radiohead.

Evidence for the Prosecution #3 - The final track on the album, "Guiding Light", features guest vocals from Ed Sheeran, whom Foy became acquainted with after supporting him on his US tour. Given Mr Sheeran's current role as a critical punching bag (unfairly in my opinion), his appearance would give critics the opportunity to direct some of the negatives adjectives used to describe Sheeran directly at Mr Vance (eg. boring, bland, etc).

So the evidence for critical derision appears pretty damning, but has the album been received poorly? Quite the opposite, in fact. Aside from the odd review backhandedly comparing it to Mumford & Sons, most of the reviews for "Joy of Nothing" have been quite positive.

And it's not hard to see why, as it's a collection of ten songs from an artist who isn't afraid to wear his heart directly on his sleeve. From the opening piano-led salvo "Closed Hand, Full Of Friends", through to "At Least My Heart Was Open" and the string-laden "Regarding Your Lover", the album is a great mix of Springsteen-esque anthemics, folksy rock, and sincere, strong vocals from Foy Vance. And surprisingly (or unsurprisingly), it is the closing ballad, "Guiding Light", featuring the aforementioned Ed Sheeran, which provides the ultimate highlight of the set.

There is the odd track which doesn't quite make an impact - "Feel For Me" sounds too much like a Commodores album track, and not in a good way. But overall, "Joy of Nothing" by Foy Vance is a splendid little album which should find favour with those who like their music a little bit on the wistful side.