The Superman Revenge Squad Band - A Funny Thing You Said 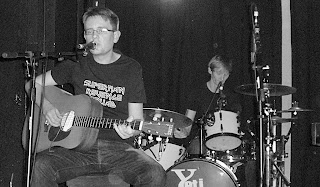 The Superman Revenge Squad Band is the brainchild of Ben Parker, who was previously part of the Art Brut-approved Nosferatu D2. With the drummer from that band now on board, the group will be releasing their album "There is Nothing More Frightening Than the Passing on Time" next month. Taken from that album is "A Funny Thing You Said", an accordion-led ramshackle indie-rock song with witty stream-of-consciousness lyrics and a well positioned and a rather lovely saxophone solo.

"A Funny Thing You Said" is available as a free download.

Email ThisBlogThis!Share to TwitterShare to FacebookShare to Pinterest
Labels: Croydon