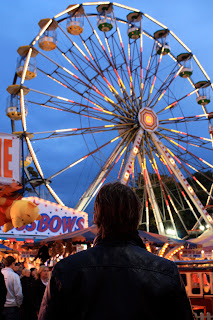 
Coney Island Sound is the project of  Ewan Gordon, a Northern Irish native who's now based in sunny Northumberland. A self-described experimental electronic folk artist, he mixes toy pianos and keyboards with found percussive sounds and guitar and string loops to create his coast-inspired music. Having released several singles over the past year, his debut full-length album, "Klang!", was released last month. Despite the esoteric nature of the release, it has picked up quite a bit of radio support, with Radio Ulster, 6music and XFM all supporting various tracks on the album. And it's not hard to see why the album has picked up such support.

"Klang!" is made of happiness.

The album starts off with "Introducing Mr Kellogg", a track which is built around a riff which appears to have been composed on an old mobile phone, to which the sounds of music boxes, birdsong, subtle percussion and string loops are added to create a cacophony of musical loveliness. The other main highlight of the album is "The Lemonade Song". The track is one of the few tracks on the album to feature vocals, albeit vocals which have been somewhat warped to the point where they become more atmospheric than melodic, coming off like a great successor to the music of Lemon Jelly.

Although those songs are the highlights of the album, it should be noted that the album works much better as a whole rather than dissecting each track individually (although from this blog's perspective, it's nice to see tracks titled "Nautical By Nature" and "Romaji"). "Klang!" by Coney Island Sound is 52 minutes of relaxing, soul soothing, largely instrumental music which makes life that little bit happier. Fans of artists like Lemon Jelly, Penguin Cafe Orchestra & The Go! Team's instrumental interludes will find much to like here, but in truth Coney Island Sound stands up as a highly original piece of work in its own right. You will be hard pressed to find an album like it this year.

Posted by Christopher McBride at 17:07