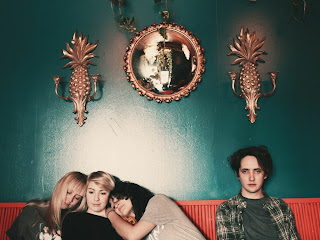 Now here's a girl:boy gender ratio you don't see every day in bandkind. Brisbane based group Major Leagues consist of three girls and one guy, who hides in the back as the drummer (I love how self-aware the band appear to be of this in their promo picture). The only two other bands off the top of my head that have the same combinations are Haim and Elastica during their first album (before they ruined it by adding two members and releasing their goodness-awful follow-up "The Menace"). There's probably a sociological reason why this gender ratio is not more common in rock music, but I think I will leave it up to someone much smarter than myself to narrow down the exact reasons why.

What is clear however is that the latest single from Major Leagues, "Endless Drain", is a rather marvelous song indeed. Clocking in just over the two minute mark, the song is a lovely slice of reverb drenched indie-surf rock which matches up a great chorus with a somewhat sinister guitar riff, one which fans of Best Coast
will absolutely love to pieces.