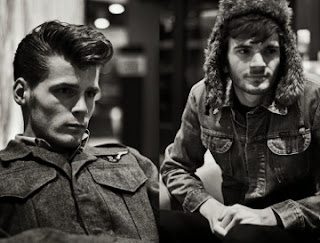 Every now and again, I come across an artist that I mean to mention on the blog, but for some reason or another I don't get around to putting metaphorical pen to paper to write about them. Back in February, I caught Dublin duo Hudson Taylor supporting Jake Bugg in the Mandela Hall in Belfast. Having been informed beforehand that they sounded like "Mumford & Sons sans banjos" before seeing them, I was rather impressed by their stage presence and the reception to their set, getting the crowd singing along to their songs despite being relatively unknown. Although I promised myself to put something on the blog to spread the word about them, for various reasons, a post never materialized.

Not that they needed my support, of course. Since that gig, they have been signed to Polydor, supported The Rolling Stones* and built up an incredibly loyal following on YouTube. With a new E.P out next month, as well as a forthcoming UK headline tour, now is as good a time as ever to finally visit the group, and the track that should bring them to the next level.

From the sound of "Care" the lead track from their forthcoming E.P "Osea", it would seem that Hudson Taylor have picked up a few tips from supporting Monsieur Bugg, as it seems to have a similar vibe to his track "Broken". Whether or not it gets a string laden re-release produced by Rick Rubin a la that track remains to be seen, but regardless of that it's a great little track, complete with sumptuous harmonies, a laid back rhythm, and a chorus that just screams "playlist me, radio, please, please playlist me."

The "Osea" E.P will be released on October 13th.

*Incidentally, that makes them the 3rd artist in as many weeks featured on The Metaphorical Boat to have supported that band. Jagger, Richards & co must have impeccable taste.
Posted by Christopher McBride at 22:59