The Clameens - What's the Difference 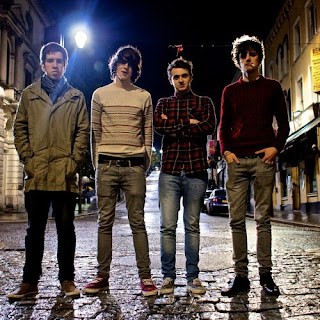 Derry band The Clameens have been making some decent waves locally over the past few months. Since the release of their last single "#Follow", the teen quartet impressed many people (including yours truly) during their set at this year's Glasgowbury Festival. They've also gained the support of Pete Doherty, and are due to support The Magic Numbers in The Empire in Belfast later on this month.

So given that they've got the support of some of the big names of mid 00s indie-rock, you could probably have a decent idea as to what The Clameens' new single "What's The Difference" sounds like. Like its predecessor "#Follow", there is a little bit of Kings of Leon going on. However, this one feels a little less derivative, as the band appear to have injected some of their own style into the proceedings. The harmony vocal intro is nicely done, whilst the guitar harmonics and gang vocals add a little touch of brilliance to what could have been a quite pedestrian song.

The Clameens are starting to build themselves towards being a force to be reckoned with on the local scene. They've got a few decent songs in their repertoire, and with a few more in the same vein as "What's The Difference" that reflect their influences rather than just copy them, they could just break out in the next year.