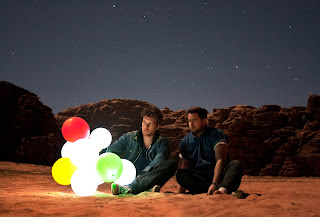 Last month, the Performing Rights Society announced the first group of artists who would benefit from grants from their Music Momentum Fund. These are grants of between £5,000 and £15,000 in order to help artists to develop their careers. The first group of artists who have received such funding include Dutch Uncles, Kindness, Teleman (who are going to use their grant to pay for Bernard Butler to produce for them), and The Wytches. The next round of applications for funding closes on October 11th, so any artists looking to apply should go over to the website to take advantage of this (although at the moment, it is only open to artists based in England).

Another act to have benefited from this fund are London based duo Thumpers. Their last single "Unkinder" made the Introducing Playlist on Radio 1, and they are due to support Chvrches on their upcoming UK tour next month. To coincide with this, the group are re-releasing early song "Sound of Screams", which has received some additional production from Everything Everything/Bat for Lashes producer David Kosten. The song is a great alternative pop gem, coming off as a heady mix of Passion Pit, MGMT and The Big Pink.

"Sounds of Screams" will be released on October 21st.