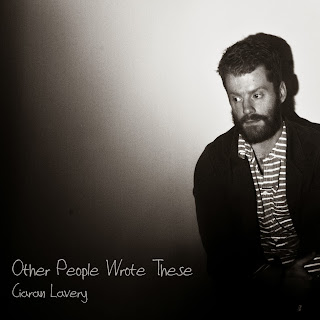 You've got to love cover versions. Even though there is a great pressure on artists to write and perform their own songs (for both artistic and monetary reasons), a well made cover version can give your career a massive boost. Would Soft Cell have been one of the biggest selling acts of the 80s had they not covered a forgotten Northern Soul track? Would the Scissor Sisters still have been successful if they didn't get their first top 10 hit from a camp re-rendering of a Pink Floyd track? Even now, a good cover version can see an artist shoot to the top of the Hype Machine chart, which can result in a career boost, or a greater appreciation of their original material.

This brings me on to "Other People Wrote These", the new E.P from Aghagallon born Ciaran Lavery. Following close after the release of his album "Not Nearly Dark", the E.P sees Lavery covering some of his favourite tracks from the 70s and 80s in his own earnest style.

In some cases, these covers work very well in this style. One particular highlight is his cover of Talking Heads' "Psycho Killer". Lavery re-imagines the song as a plinky-plonky saloon bar ditty, and as such adds a much more sinister edge to the song than David Byrne et al. could ever achieve. The stripped down version Pat Benetar's "All Fired Up" works as well, allowing his vocals to come to the forefront. However, not all the covers hit the mark, like his version of "All Night Long," which comes across as downright silly. There are some lyrics that just cannot be sung in a sincere arrangement. "We're going to party, fiesta, forever, come on and sing along" are among those.

"Other People Wrote These Songs" is an interesting little diversion from Ciaran Lavery. Not every cover on the E.P might work, but there's enough on it that makes it worth checking out. And who knows, some people might enjoy his versions of these songs and decide to check out his original material as well.

"Other People Wrote These" is out now on a 'pay what you like' basis.