The Bedroom - The Big Up 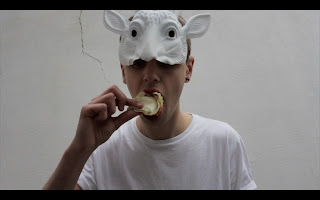 Do you think that sleep is the enemy? Would you like to conquer that nocturnal demon for the foreseeable future? Well you're in luck, for Galway native Olan Stephens, aka The Bedroom has just released the music/video combination "The Big Up", which will probably keep you up for the next few days.

Following on from his debut single "Basquiat", "The Big Up" shares the former's hip-hop beats, monotone vocals and sinister samples, yet somewhat surprisingly adds some tropical guitar to create a real Frankenstein's monster of a tune. As for the music video, to call it unsettling would be an understatement. Somehow, they have managed to make ice-cream unnerving, which I imagine is what the video was aiming for.

The Bedroom is a very weird project indeed. It will most definitely be most people's cup of tea, it might be too left field, freaky, or niche for some people's tastes, but I think it wouldn't be hyperbole to say that there really isn't anyone in the music world doing what it is doing. Whether or not that's a good thing remains to be seen.

Posted by Christopher McBride at 23:20