My New Favourite Tribe - Wake Up 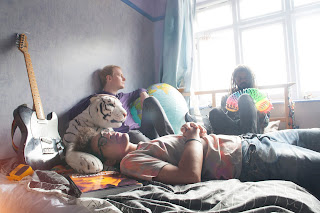 Remember a few years ago when the media tried to make wonky pop a thing? In a attempt to add credibility to pop music, and get coverage in the 'cool' press, the term was coined to make it sound a little bit edgier. Of course, many of the artists lumped in that category were in fact as pure pop as a Pop Rocks explosion in a Diet Coke factory, with Wikipedia helpfully informing us that its practitioners include Mika, Alphabeat, The Ting Tings, and for some God-forsaken reason, Lady Gaga.

But even if the generic label appears to have been misplaced in the past, there are still artists in the present for whom the tag would be appropriate. Take Brighton based trio My New Favourite Tribe. Their debut single "Victory Parade" got critics' tongues wagging at the tail end of last year, and are now preparing to release their follow-up, "Wake Up". It is a song with with two wonderfully strong pop hooks, an off-kilter synth and a lovely clean guitar riff, and the song bounces along like a perfect dream.

Wonky pop is a generic label that carries a lot of baggage, yet it seems like an appropriate one for My New Favourite Tribe. It's a song that feels like it should be a hit, yet doesn't seem to conform to typical pop tropes.

"Wake Up" is released on August 25th.