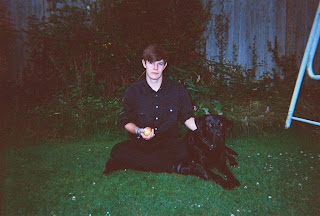 A few months ago, the CBBC show Horrible Histories included a sketch about the life of Charles Dickens, which was performed as an incredibly loyal parody of The Smiths, right down to the gladiolas. Proof if it was ever needed that there is a market for mixing history and those indie-rock favourites.

Which leads rather nicely into Brighton group Ancient Times. Fronted by George Smale, combine an interest in historical mythology with jangly post-punk inspired music. Their latest single is the double A-side "Nightschool/Hieroglyphic". Both songs are rather decent indie-rock tunes, but the strangest thing about the release is just how uncannily like Morrissey the vocals sound. If you were to play these songs to the uninitiated, then they might mistake them from early Smiths outtakes.

"Nightschool/Hieroglyphic" will be released on vinyl on September 16th.


Posted by Christopher McBride at 17:19

Email ThisBlogThis!Share to TwitterShare to FacebookShare to Pinterest
Labels: Brighton