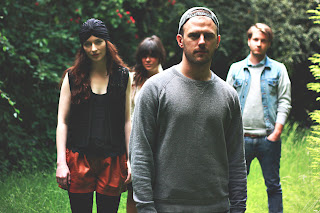 Let's be honest. Who doesn't enjoy a lovely collaboration between three wonderful emerging artists from Northern Ireland? (A. Bores. Bores do not).

"Water" is a collaboration between Derry based lullaby-folk group The Jepettos, Alana Henderson, whose cello-pop sound really impressed at Glasgowbury, and Scott Jamison, who is better known as a member of Belfast disco-rockers Go Wolf. It's quite a nice collaboration, one which brings out different sides to each of the artists involved. The cello adds a certain amount of grit that was absent on The Jepetto's material to date, the harmony vocals of Matt & Ruth during Alana Henderson's verse adds a certain sweetness that hadn't been heard before in her material, whilst it's safe to say that no Go Wolf song before or after this will ever sound like "Water".

If this song marks a permanent collaboration between the artists, "Water" is a great starting point for now. If it is just a one-off, then it will stand on its own as a fine example of artists from three different perspectives coming together to create something beautiful.

"Water" is available on a pay what you like basis.