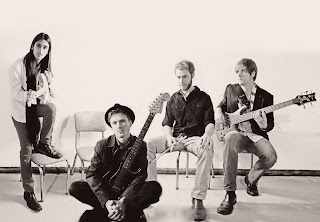 Minneapolis based quartet Step Rockets appear to have lofty ambitions, expressing their desire to become the first band to perform on the moon. Given the strength of their new single, "Kisser", I imagine that they might have every hope in the world of achieving that.

For a song by a self-released band, the sound of "Kisser" is surprisingly accomplished. Step Rockets appear to have followed the example of other indie-rock artists of late like Imagine Dragons, taking ideas production-wise from electronic and pop and synthesizing them into their own sound. They've got deep drums, up-to-date synths, a massive stadium-sized chorus, and rather refreshingly, a big hulking guitar solo.

Keep an eye out for Step Rockets in the near future. With a sound that is current, accessible and ridiculously radio-friendly, they will be your favourite new band of 2014.