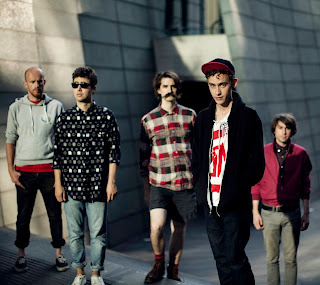 When the self-proclaimed fans of your group include Judi Dench, then you just know the band in question are a modern, trendy bunch of upstarts, especially if such upstarts have just signed to the trendiest of all trendy record labels, Kitsuné (that record label that always sells its wares on the 2nd floor of Urban Outfitters).

And so it's time to introduce Years & Years, a London based quintet fronted by Olly Alexander, whom I am informed appeared in yoof dramedy Skins at some point. "Traps" is their second single, and is very much a song of two halves. The first half is the 'artsy' section, with wonky synths, subtle percussion and an intimate atmosphere. The second half however throws this out the window and instead concentrates on making an enjoyable pop song, complete with disco beats and a stonking bass line.

"Traps" will be released on September 9th.

Posted by Christopher McBride at 11:58