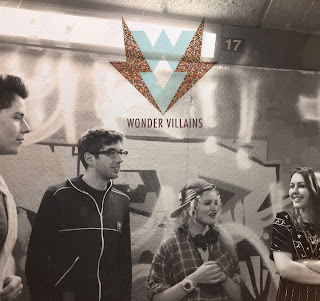 With every post that this blog makes about Derry band Wonder Villains (and we've sure made a lot of them since 2011), there's always the worry that we'll run out of superlatives, or exciting Wonder Villains related events to mention. Thankfully, the band sure do like to make things easy for us all. Since the release of their last single, "Blonde", the group has enjoyed quite a lot of airplay on Radio 1, they played a storming set that the final Glasgowbury Festival, and recently held a semi-exclusive 'rock party' at the Sunflower Bar, playing more or less every single one of their songs they had written to date.

And to top things off, the band are now lining up to release their next single. Fans of Wonder Villains will already be familiar with "33" - it was originally released as the b-side of their first official single "Zola", and it is the song that the band normally kick off their set with. The song has since been re-recorded for inclusion on their upcoming debut album "Rocky" (which I have been told on good authority is fully recorded, release date to be confirmed), and is a corkingly fantastic pop song, complete with all the band's trademarks - stonkingly big pop hooks, a slight punk-y style, pop-culture infused lyrics (this time referencing both Jorge Garcia and one of the band's key influences, Weezer), and most crucially, a smile inducing sense of fun that no band could possible match. Not even Katrina & The Waves, and they flipping walked on sunshine.

It's good to see that like their last single, "33" has picked up a bit of support on Radio 1 and a few other stations. Wonder Villains are a band that need to be heard. With so much bad things in the world, it's great to have a group who can make everything sound 100% better.

Posted by Christopher McBride at 17:43