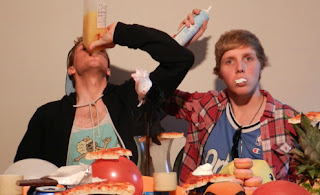 Over the past month, everyone's favourite Portstewart based chiptune-rock duo with a Pokémon derived moniker, TeamRKT, have been releasing a brand new track weekly as part of their "Free Track Friday" project. The fifth such track, "Rare Candy" (which takes its name from an item from the Pokémon games which allows the creatures to advance in power quickly), has been released, and like previous TeamRKT songs that have come before it, it is a joyous little piece of video-game pop with a great big chorus.

Even more excitingly, the band have released a music video to coincide with the song's release. It's a fun home-made video which takes inspiration from old-school video games and that Blackberry ad that Tame Impala did the soundtrack for.

"Rare Candy" can be downloaded for free from TeamRKT's Bandcamp page.


Posted by Christopher McBride at 22:50