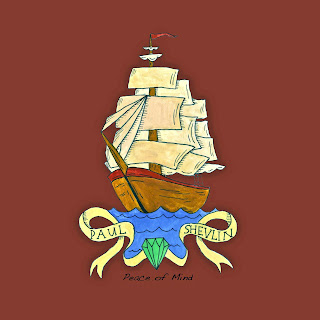 Paul Shevlin is one of the more under-appreciated artists currently plying their trade in Northern Ireland. In the past few years he's released some great piano-pop songs, performed live sessions on Radio Ulster, and even found the time to win a Brit Award, an achievement which saw him and his band Hologram get a track featured on the CD for this year's award ceremony. Despite this success, it seems rather odd that Shevlin hasn't yet risen to the top of the tree locally just yet.

Perhaps all that could change with the release of "Peace of Mind". The E.P is a collection of largely home recorded songs that Paul Shevlin didn't think suited the anthemic rock style of his main project Hologram, choosing instead to release them under his given name. The songs on the record don't really fit into one succinct category, with lots of different sounds over the course of the release's 5 tracks. Opening song "God Forgive Me" is an acoustic-led folk track with a lovely pop chorus. "You Say You're Ready" mixes glitchy beats and electronics with xylophone samples and Shevlin's pained yet sincere vocal delivery.

"All I Will Ever Be" is a rather odd gem, mixing a bossa nova rhythm with a string-led chorus, whilst the sparseness of the title track "Peace of Mind" as little bit of James Blake to it. The closing track is a piano cover of Imogen Heap's "Hide & Seek", recorded at Abbey Road Studios. It's as stripped back as the original, albeit with an acoustic slant rather than an electronic one.

"Peace of Mind" is a decent collage of tunes from a rather under-appreciated Northern Irish artists. I sincerely hope that people start to wake up to the quality of Paul Shevlin's music, whether in Hologram or in his solo material.

"Peace of Mind" E.P is available to download now.


Posted by Christopher McBride at 17:08