Cmn ineed yr hlp - It Came Without Warning...As Most Disasters Do 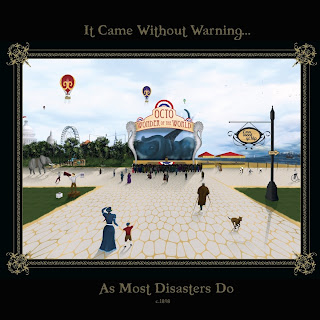 As the overwhelming success of the wonderful Public Service Broadcasting has demonstrated, people react incredibly positively to music that utilizes vocal samples from the past in order to successfully make the music of the present and future. Although there are bands on this side of the Atlantic who are doing this to great effect (like Fold, who recently remixed the aforementioned PSB), it's even nicer to hear bands doing the same on the other side.

Enter Cmn ineed yr hlp (sic), a trio hailing from Chicago. Their 2nd release, "It Came Without Warning...As Most Disasters Do", was launched earlier this month, and just like PSB, they use vocal samples as the basis for their music. However, that is largely where the similarities end. Whilst the samples used by PSB are largely used in context, the samples employed by Cmn ineed yr hlp have been taken from various public domain movies, newsreels, television shows and radio dramas in order to create an original, sci-fi influenced narrative. To quote the band:

"The album tells the tale of a gentle sea monster trapped and kept against his will for the amusement and profits of his oceanfront captors. Our protagonist becomes frustrated with his predicament and sets forth on a plan to escape, regardless of the cost in human life."

And in keeping with the epic scale of their narrative, the band's sound is found firmly within what is perhaps the most epic of all rock genres - post-rock. With it's uncompromising peaks, misleading troughs & complex guitar patterns over the release's 24 minutes, it calls to mind the darker moments of fellow post-rockers And So I Watch You From Afar.

"It Came Without Warning..." will be somewhat an acquired taste for those who aren't big on post-rock, but with its sea monster anthemics, it's hard to deny that there is unlikely to be another album like it released in 2013.

"It Came Without Warning..." by Cmn ineed yr hlp is out to download now, both in a 5 track version and as one continuous song.

Posted by Christopher McBride at 17:22