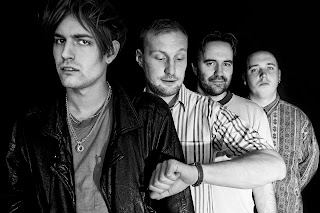 The way that London group Gaoler's Daughter been covered on this blog has been somewhat akin to a visiting aunt or uncle - dizzily exciting when they come to visit, yet largely forget about them until they return the next year bearing more delicious gifts. They first caught our attention nearly two years ago with the dark, brooding "St Peter", and then again last August when they released "When We Were Young", a tribute to unfulfilled childhood dreams.

Now hoping to catch our attention once again, the band have released "Cordelia", a track which will preview their long awaiting debut album. The song has already picked up quite a few fans on the blogosphere, and has found quite a few fans on the radio as well, with the song being shortlisted for 6music's Rebel Playlist. And it's not hard to see why, as it's their most infectious tune to date, mixing their doom-laden sound with an infectious chorus to great effect. With more material forthcoming next month, I think it's fair to say that it will be a little bit sooner than a year when we next have a visit from the lads of Gaoler's Daughter.

"Cordelia" will be released on 12th August, with their debut album "How To Make Time" following on August 26th.

Promo pic is © Damian Crobak
Posted by Christopher McBride at 20:09