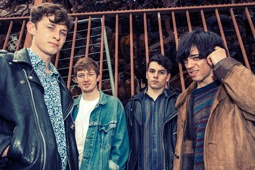 With The Pixies releasing new material for the first time in nearly 10 years, it's interesting to hear that their influence still steeps into music's collective talent pool, even among those who weren't even born when the group were releasing their iconic material.

This blog has covered Birmingham teens Dumb earlier this year following the release of their debut single "Dive", and to help cement their status as member's of the Birmingham 'scene' (alongside rising stars Superfood, whom they are supporting at a sold-out gig this evening in the city), the group have announced the release of their latest single. "Retina". The song is more or less a 2 minute 54 second love letter to the quiet/loud dymanic that Black Francis & co pioneered over 25 years ago, so much in fact that if you were to play the song to the uninitiated, they would undoubtedly have no idea that it was in fact recorded in 2013.

It's a good song, but I still hope that Dumb will be able to produce a sound that is very much theirs and theirs alone by the end of the year.

"Retina" will be released on August 12th.

Posted by Christopher McBride at 16:41