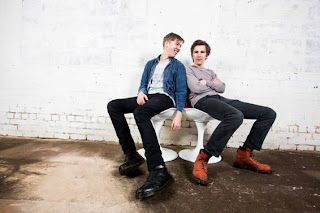 Of the many ways that an upcoming band can gain their first piece of  mainstream attention, being personally recommended by a resigning politician is probably not the most obvious, nor coolest.

Earlier this month, Labour MP Tom Watson resigned from his party's campaign team. In his parting letter, he advised Ed Miliband to listen to Drenge, a Derbyshire duo made up of brothers Eoin and Rory Loveless. Hopefully this isn't the beginning of a trend where music PRs start lobbying politicians in order to get the artists they mention name checked in Prime Minister's questions, get Acts of Parliament named after groups, and ensure that certain politicians don't mention their band altogether (and given how vociferous Morrissey and Marr have been about David Cameron mentioning The Smiths in parliament, there might be some good money in it).

But anyway, Drenge are lining up to release their self-titled debut album next month, with "Face Like a Skull" the latest single to be taken from it. It's a rather enjoyable slice of primal, garage rock built around a simple yet effective guitar riff.

"Face Like a Skull" is released on August 26th, and is taken from their self-titled debut album, out on August 19th.

Posted by Christopher McBride at 13:50