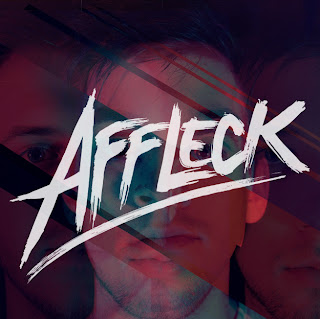 At the tail end of 2013, it appeared that Belfast band Eatenbybears were on the cusp of greatness. They were favourites on the local scene, being tipped for big things by many observers, including this humble blog.

And then they split up.

Back in April, former Ebb member Olan Stephens revealed his electronic project The Bedroom, complete with a bonkers music video to match it. And now this week, the other 3/4 of the band have come together to  release their debut E.P, which has been recorded under the name Affleck. The E.P sees the group descend further down the rabbit hole from their last single as Eatenbybears, "Your Pet is Dead", into even more uncompromising territory.

If it was necessary to describe the "Affleck" E.P in a sentence, it could probably be summed up as "Hot Chip recorded in a demented parallel dimension". The release sees the band moving away from guitar-focused tracks into dark electronic arrangements, largely abandoning obvious pop hooks in the process.

Having said that, there are some slightly poppy moments on the E.P, albeit ones of a twisted variety. "Cat King Lightning", which should be considered the focus track of the release, is track which combines a warped, dissonant keyboard hook with the violin lines of Aidan Kelly, a rather accessible chorus, and a rather unexpected jazzy piano breakdown. Similarly, "Lucete" (which the mighty oracle that is Google informs me is the name of a character in Bioshock: Infinite) has a chorus the size of the Eiffel Tower ("All this has happened before, and all all this will happen again"), yet the song itself has a rather odd structure which builds up to a climax where different vocal lines bounce off each other to create a discomforting effect.

For fans of Eatenbybears listening to Affleck for the first time, there might be a level of culture shock greeting their debut release. It is not a record that could be called instant, but one which benefits from repeated listens, with different little nuances to be discovered on each visit.

"Affleck E.P" is available to download on a pay what you want basis. For further reading, check out this interview with Affleck explaining the reasons for the dissolution of Eatenbybears.


Posted by Christopher McBride at 16:00