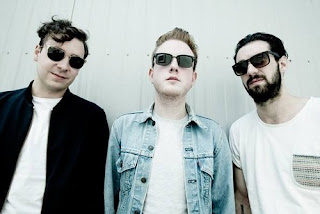 It's time to right a wrong. Not a major world altering wrong I should note, but a wrong nonetheless.

In the two years since starting this blog, The Metaphorical Boat has yet to dedicate a post to the biggest band to break out from our home turf, Northern Ireland, in the past few years, Two Door Cinema Club. This is a glaring oversight, because in a roundabout way, they were somewhat responsible for me starting this blog in the first place.

In the summer 2008, I was taking part in a week long event management program at the Waterfront Hall in Belfast. During the week, I was given tickets to see Los Campesinos!. They were playing there as part of a festival at the venue, and because of this, three local groups provided support for them. Before that gig, my exposure to local music was somewhere between threadbare and non-existent.  Afterwards, it was as if the scales had been lifted from my eyes, and a whole new world had opened up. One of those groups that helped to open my eyes to this world were Two Door Cinema Club, back when they were still using an Apple Mac for beats rather than a live drummer. I was so taken by the band (as well as the other two supporting acts, Cat Malojian & Kowalski), that I started a music blog there and then, and endeavored to spread the word about music in NI to the masses. That blog only lasted two posts, but my enthusiasm for local music as a result of that gig carried on into university, where I got involved in Queen's Radio, and eventually led to this blog starting in 2011. So thanks a lot, Two Door Cinema Club, you inspired one of the best things I have ever been involved in, and apologies for taking so long to give you a proper mention on the blog.

Had you told me back in 2008 that the group whom I saw perform a song called "Pain Au Chocolate or Is It An Onion" would be worldwide superstars within a few short years, I would have laughed in your face. However, in 2013 the band have sold millions of records, had a top 20 album in the USA, and will be playing the O2 Arena in London come December time.

Despite all their success, and despite the wealth of material at their disposal, the trio, rather surprisingly, have never had a single top 40 hit to their name. All this could change however with the release of their new single, "Changing of the Seasons". Produced by French wunderkind Madeon, the song is by far the danciest song the group have released to date. Some of their trademarks remain intact, like the searing guitar riffs, but on this track the synths take on a more prominent role, and as a result the song is the most radio-friendly song the group has produced to date. I would not be surprised if this song gave the band their long awaited first top 40 hit, and if both Radio 1 & Capital Radio decide to playlist the song before its release, TDCC could have a monster smash on their hands.

"Changing Of The Seasons" will be released as a three song E.P on September 30th.