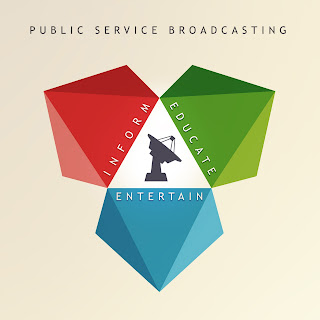 
Who would have thought this last time last year that many people's most anticipated album of 2013 would be from an artist that turns public information films into sleek, enjoyable tunes? Yet that is exactly what London duo Public Service Broadcasting have done with their debut album "Inform - Educate - Entertain".

For those not immediately familiar with PSB- it consists of J Wilgoose Esq. and his drumming amigo Wrigglesworth, who use vocal samples from archive films as a springboard for their musical excursions into the past. Over the 11 tracks, these include films covering the fashion industry, climbing mountains, car safety and the birth of colour TV.

What is particularly striking about the album is its sheer variety. When an album is centred primarily around vocal samples, it is possible that the music could end up very samey and repetitive. Thankfully, that is not the case on "Inform - Educate - Entertain." If it had to be pigeonholed into one genre, it would be electronic-rock, although even that would be inaccurate, with some songs being more rock-orientated and vice versa.

It is the more rock-orientated songs that end up being the strongest tracks on the album. Their most recent single, the car safety inspired "Signal 30", is a thundering rock track that wouldn't be out of place on a Queens of the Stone Age album, whilst "Spitfire" has one of the best guitar hooks that you're likely to hear on an album all year. There's also a playfully dark sense of humour to be found on these tracks - some of the vocal samples on "Signal 30" are hilarious when taken in isolation ("no drinking and driving...not even water"), and there's something profoundly ironic about the Krautrock influences on "Spitfire".

Of the more electronic-orientated songs, the highlight is "ROYGBIV", the Lemon Jelly-esque track that acted as an introduction to Public Service Broadcasting for many people last year. Slightly re-recorded for the album, the track is  the most freeform tracks on the album, with the track evolving and moving in new directions at a whim. The introduction of the banjo line 50 seconds into the song is a particular highlight. Also of note is triumphant "Everest", which mixes Jan Hammer sounding electronics with a wonderful brass section, and the fashion inspired "Now Generation", which mixes a Prince-esque strutter with keyboards that wouldn't sound out of place on a Sega Megadrive game.

It also seems that one track on the album has opened the door to a new genre altogether. "Night Mail" is a track based around the Post Office, yet the way that the samples have been manipulated, it appears that the track is being "rapped" by the presenter, in what might just be the first recorded example of "Post-rap".

If the album has one weakness, it's that it's a rather short album. Although it has 11 tracks, one of these, "Qomolangma", is a short instrumental companion piece to "Everest" (Qomolangma being the Tibetan name for the mountain), whilst the title track is a megamix of the album's remaining songs. Even so, these are minor quibbles that don't detract from the enjoyment of the album.

"Inform - Educate - Entertain" by Public Service Broadcasting is definitely an early contender for album of the year. For an album based on such a narrow premise, it is a richly diverse album, a highly enjoyable one, and one which is very much unique.

Email ThisBlogThis!Share to TwitterShare to FacebookShare to Pinterest
Labels: album review, Tips for 2013