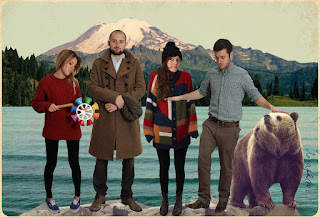 It's always lovely to hear new material from Kent folksters Keston Cobblers' Club. Their debut album "One, For Words" demonstrated their own quirky take on English folk, and their memorable music videos helped them to stand out among the post-Mumford crowd. Fleetwood Mac really have no excuse not to return their calls.

The band have released a new single to coincide with their tour dates supporting The Leisure Society. "Beam" is another reliable foot-stomping folk effort from the group, but what makes the song is the nifty music video that they've made for the release. Meager in budget yet brimming with fun and creativity, the clip sees the band invading a clothes shop with a group of friends, sort of like an eccentric English version of the Harlem Shake.

"Beam" by Keston Cobblers' Club is out now.

Posted by Christopher McBride at 15:16