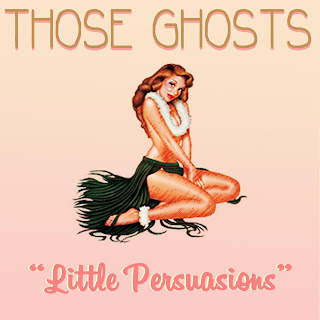 For a band that hadn't even played a live gig three months ago, Strabane based group Those Ghosts have been picking up quite a bit of traction lately. Their debut release "Evelyn" received quite a bit of local airplay, and has had much more streams on Soundcloud than the average Northern Irish artist. Even more promisingly, the band followed in the footsteps of SOAK by coming first in Chordblossom's Kickstart competition, winning some great prizes to help them on their way to musical notability.

Off the back of this support, the group have released their 2nd E.P, "Little Persuasions", a release which should help to cement their reputation further. Anyone who became enamored with the band off the back of "Evelyn" will enjoy the first two tracks on the E.P, which tread a similar path. "Set Upon By Dogs" and "Unknow" are very much in the Foo Fighters mold of alternative-rock, both feature a strong guitar riff that anchor the song from the beginning, and both have massive choruses, the latter song sharing similarities to "California" by Phantom Planet.

"It's Caving In" on the other hand is a different beast altogether, coming across more like Placebo than US alt-rock. It's also the only track on the record to feature keyboards, adding a welcome bit of variety to the song's soaring outro. The final track "All Is Even"  has a decent Stereophonics-lite chorus, but it can't quite match the strength of the E.P's other songs.

"Little Persuasions" should be enough to excite those who are already fond of Those Ghosts and to pique the interest of those who aren't, being immediately familiar whilst covering some new ground. It's great to hear a rock band that isn't allergic to songs with big, accessible choruses.


Posted by Christopher McBride at 14:57