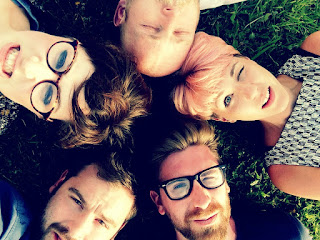 Hailing from the great musical nirvana that is Torquay, 5-piece Big Wave make the sort of indie-pop that makes you feel glad to be alive (as opposed to the type that makes you wish you were dead?). Having spent 2012 releasing an E.P and two singles, as well as gaining support slots with Metronomy and Tender Trap,  the group are gearing up to release their latest single, which is a rather lovely treat indeed.

"Goldmine" is a song which borrows elements from some of the best songs of the last 40 years and mixes it into one fluffy, summery package. From the chord sequences inspired by "Sweet Jane" and "Teenage Kicks", the guitar riff not to dissimilar to "The Bucket" by Kings of Leon 2 1/2 minutes into the sort, right through to the shouty gang-pop vocals which call to mind The Go! Team's most recent album, there is a lot on the song which will sound familiar, and there is so much to love as well.

"Goldmine" will be released on May 20th as a limited edition gold cassette.

Posted by Christopher McBride at 12:14