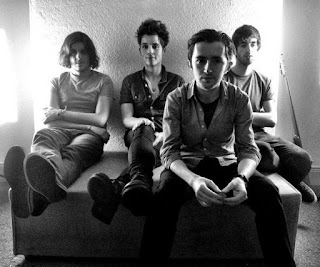 Derry band Future Chaser have been a going concern locally for many years now, although the haven't been as active recently. This is probably due to the fact that two of the members, Ryan and Kieran, also make up half of Wonder Villains, who have been doing rather well for themselves. The boys are now back on the Future Chaser train, and as well as a few upcoming gigs in Belfast, the gang have released a new E.P, "Bronze".

The E.P is largely made up of decent pop-rock tunes, not too dissimilar to the youthful, punky energy of early Ash. "Fighting In The Streets" is the best song in this style, complete with a strong chorus and a great vocal hook. The best song on the E.P however is the one that strays away from this formula, "Bronze". The track, which features fellow Villains Eimear and Cheylene on backing vocals, is a slow burning rock tune which explodes like a time released firework, which calls to mind "Kings and Queens" by 30 Seconds to Mars.

"Bronze" E.P is available now on a pay-what-you-like basis.

Posted by Christopher McBride at 17:09