Prides - Out of the Blue 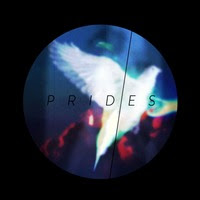 Oh, don't we all just love a good old bandwagon?

Several months after Glaswegian synth-pop trio Chvrches became blog catnip on the back of just one song, another Glaswegian synth-pop trio have released a single song onto the wild wild web, which has been met with the predictable glowing praise from many corners of the blogosphere and has shot up the Hype Machine chart rather nicely. The group in question are Prides, who according to one blog previously made mini-roars under the name Midnight Lion, and the song that has tickled the fancy of so many is "Out of the Blue".

And of course, there's a reason why the song has excited so many people - it's a ruddy brilliant song indeed. The song is fashioned around a synth riff that isn't too dissimilar to "Take a Walk" by Passion Pit, a harsh electronic production somewhat akin to The Naked and Famous, and most excitingly of all, a massive chorus the size of the Sea of Tranquility.

As a "calling card track," it makes a rather marvelous first impression. The question is where the band are going to go next. If I was a wittier blogger, I would suggest that they ask Mark E. Smith if they can support his band so they can finally prove once and for all that Prides come before The Fall, but alas, I'm not. For now, I'm just happy enough to get on the bandwagon of the makers of a song indeed.

Posted by Christopher McBride at 21:00