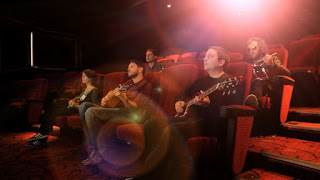 The initial release of the album "Black Bank" by Straw Bear seemed to have been largely neglected by many people when it was initially released last year. It's probably because it was released in right in the heart of December, when bloggers and the musical intelligentsia are too busy informing us of their best tracks of the year to delve into new releases. Nevertheless, in the past few months the band have made enormous strides. The album's first single, the delicate "Kitty" picked up some airplay on BBC Radio 2, and a performance at The Great Escape festival led to the band getting played on Radio 1.

The 2nd song to be released from the album is "Snobbery", which has been snipped by a minute from its original version for radio purposes. Whilst it's not the most obvious choice of song from the album ("State of The Nation" just screams out for the single treatment), it is the one which most represents the Straw Bear sound. A breezy folk melody, strong vocals and sly lyrics about wanting to escape from one's in-laws make this a very enjoyable track indeed.

"Snobbery" will be released on July 29th. It's taken from the album "Black Bank", which is out now. Find out why you should own a copy here.


Posted by Christopher McBride at 23:13