Melt Yourself Down - We Are Enough 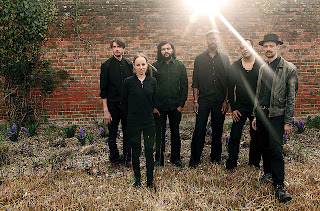 Say what you like about Jools Holland, but 20 years into hosting "Later...", his show can still throw up the odd musical surprise. Anyone who watched the live show on Tuesday evening would have been treated to the musical delight that is Melt Yourself Down, performing their single "We Are Enough".

The band are made up of six individuals who have been part of London's jazz scene over the years with many different projects, including Polar Bear & Acoustic Ladyland. In spite of this, their sound encompasses many different genres, including electronica, punk, world beat and alternate rock. My initial thoughts on the group are as follows:

1. Melt Yourself Down sound like a screamo band with funky brass taking the place of scuzzed out guitars.

3. I really hope that Kushal Gaya didn't destroy any of the studio's equipment during their performance. Amps aren't cheap.

4. They are very good indeed. Musically they're faultless, and it's fair to say that there isn't any other bands out there doing exactly what they do.

"We Are Enough" is taken from Melt Yourself Down's self-titled album, which is out on 17th June.

Posted by Christopher McBride at 12:32