Meltybrains? - Intros Are So Original 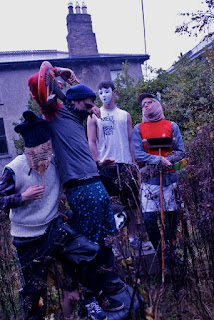 You've really got to love a band who let you know exactly what you're setting yourself up for in their band name. This is most definitely the case with Irish 5-piece Meltybrains?. The quasi-mysterious group are one of a growing number of instrumental rock groups who are getting the island very excited indeed, and as their latest single, the rather sarcastically titled "Intros Are So Original" suggests, they have added their own spin on the form.

As its title suggests, "Intros Are So Original" seems to be inspired by the introductory tracks certain alternative artists' albums. Whilst it might be lazy to suggest that the song sounds like a mix between "Intro" and "Intro" by the xx and Foals respectively, borrowing the former's guitar sound and the latter's drum production, it is a decent starting point to describe what to expect. The group do expand beyond this base though, with the song adding some nifty electronics, as well as some expert fiddle playing that wouldn't sound  out of place on an Irish trad album.

So, will Meltybrains? um...melt your brain? Most definitely. But with instrumental-rock every bit as exciting as And So I Watch You From Afar or Maybeshewill, it will be a fun ride regardless.

"Intros Are So Original" is taken from their E.P "Attention! Now That We Have Your Attention", which will be released on May 20th as a limited edition t-shirt.

Posted by Christopher McBride at 12:56