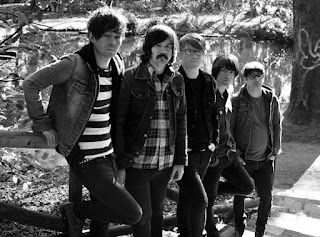 Since the release of their debut album "Sugar for My Soul" in 2010 and the live dates from around that time (including three nights supporting Suede), it's been all change for Dublin based band Sweet Jane. Their co-lead singer Lydia Des Dolles left the band, with Danda Paxton becoming the group's sole vocalist. The band also added brothers Neil & Conor to the line-up, giving the band a grand total of four Paxtons.

The change of line-up sees the band move away from the shoegaze-y sound of their first album into a more psychedelic rock format. The lead track from their most recent E.P, "Witches", is firmly in the rock camp, yet features prominent (synthesized) string segments throughout, making it sound like a cross between the rockier songs of Primal Scream and "Me Plus One" by Kasabian. I do wonder why they decided to keep the name Sweet Jane rather than go under a new moniker given the change in the band's sound and membership, but it's a rather nice song, regardless of its banner.

"Witches" is taken from the band's sophomore album "By the Ocean, By The Sea", which will be released on September 9th.