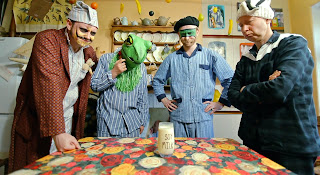 If there's one group you can rely on for tuba powered pop with completely daft lyrics, it's Leeds quartet Biscuithead & The Biscuit Badgers. Having previously charmed us with their tales of wanting to co-exist with dinosaurs and losing the love of your life whilst eating a chinese, the group are back with their latest offering, the lactose-free "Soy Milk".

The song continues the band's mixture of quirky instrumentation and somewhat hilarious lyrics about the joys of the bean based liquid, including "there's nothing to spoil my enjoyment, cause when you were made no cows were exploited". In keeping with their other releases, the music video is a rather offbeat affair, with the members of the band going to their garden shed laboratory in an attempt to find out the secrets behind soy milk.

Biscuithead & The Biscuit Badgers might not be racing up the charts in the future, nor headlining the Pyramid Stage at Glastonbury, but there is something incredibly charming about the group. Such is the timeless quality of "Soy Milk" that it could have been recorded 40 years ago, or 40 years in the future, sharing the same eccentric feeling of The Bonzo Dog Doo-Dah Band.

Posted by Christopher McBride at 21:30