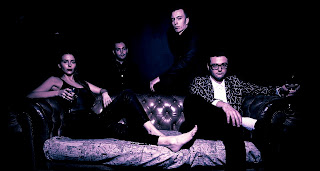 It's always the case that when an artist from an under appreciated genre breaks out into the mainstream unexpectedly, it triggers a feeding frenzy both among record labels and among music fans to uncover the next Band X. For example, the success of Bastille in 2013, with a massive selling album and an ubiquitous radio hit, has sparked the question as to who will follow in their footsteps. One group that might just step up to the mark are London trio Strangers.

Having released a few EPs in 2012, as well as enjoying support slots for Grimes and Nikki & The Dove, the group are gearing up to release their debut single, "Something New". The song does call to mind Bastille in several regards. Firstly, the vocals of David Maddox-Jones bears an uncanny likeness to that of Dan Smith. The song is also stylistically similar, as it has a sleek, contemporary pop feel to it, with some futuristic synth parts. And finally, like Bastille, there is not a single guitar in sight.

The song might not be exactly be "Something New" (pardon the pun), but it is definitely a song worth listening to. Of any of the acts that could benefit from an increased public appreciation of credible synth-pop, Strangers stand as good a chance as any of making the breakthrough.

"Something New" will be released on May 13th.

Posted by Christopher McBride at 22:15