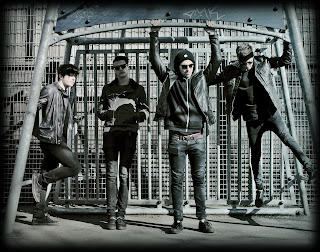 Bristol based quartet Seasfire have built up a loyal following over the past 12 months, and have become something of a darling for music blogs through their nomination for the Blog Sound of 2013. Following a low-key re-release of "Falling" earlier this year, the band have announced the release of "Oh...Lucifer"

The song continues the band's penchant for taking a contemporary rock structure and augmenting it with electronic beats and production. It is perhaps their most accessible track to date, with a clear verse/chorus structure and some trance inspired synths. Stylistically, it is a song which isn't a million miles away from the sound that Hurts have moved into recently, albeit one which is a lot rougher around the edges.

"Oh...Lucifer" is the sound of a band who are trying to win over new fans simultaneously attempting to please those people who have already fallen under their spell. Only time will tell if this pays off.

"Oh...Lucifer" will be released on 1st July.

Posted by Christopher McBride at 22:28

Email ThisBlogThis!Share to TwitterShare to FacebookShare to Pinterest
Labels: Bristol, Tips for 2013