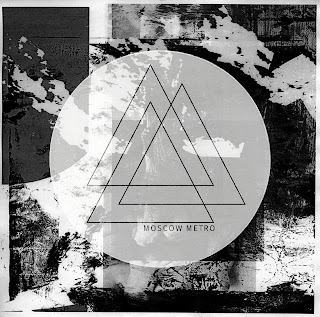 It's not often that the debut recordings from a brand new group appear to the world so fully formed that you'd think that they have been around for years, but this is exactly the case with the debut double A-side from M O S C O W  M E T R O. The band are based in Limerick, but contain members from both Ireland and San Francisco, giving their sound a real transatlantic feel.

The first track, "Spirit of a City", is a mid tempo anthemic rock number with a haunting undercurrent, very much in the mode of The Killers or The National. It is the sort of song that seems tailor made for multi-seated stadiums and for closing festival proceedings.

"Cosmos" on the other hand is a much stronger track, one which is very much indebted to post-punk. The verses of the song call to mind the material of Joy Division and "Seventeen Seconds" era songs from The Cure, before the chorus  enters into anthemic mode (the group's favourite type of mode), with a sense of angst that would not sound out of place on a Placebo track.

It is not often that this blog gives in to hyperbole, but in this case an exception will be made. Based on these two tracks, M O S C O W  M E T R O are your new favourite band. Both "Spirit of a City" and "Cosmos" represent a near-perfect debut for the Limerick guys. These are songs that deserve to be played on radios nationwide, ascend the Hype Machine, and be downloaded by thousands.


Posted by Christopher McBride at 15:48