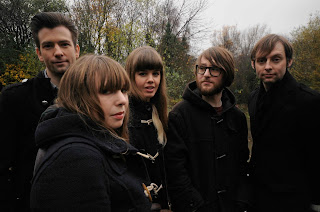 Pirate inspired indie-pop is the order of the day for London based Cosines. A self-described 'mathematical pop' group, their latest single, "Hey Sailor Boy!", is a piano led upbeat pop ballad told from the perspective of a female pirate. It's a charming song with echoes of Allo Darlin & Camera Obscura, and proof that you can indeed make a non-sexual song about booty calls.