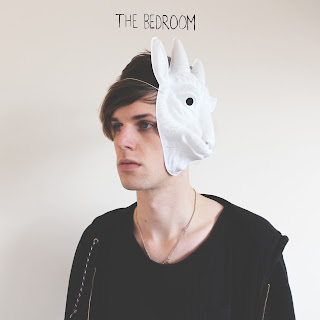 It was sad to see highly regarded Belfast band Eatenbybears calling it a day last month. Having released an E.P and two excellent singles over two years, it's a shame that they decided to dissolve when they did. Nevertheless, it's good to see the members of that group continuing with their musical exploits. Three of the members will be continuing under the name Affleck, whom I understand will be treading a similar musical pathway to EBB. As for guitarist/vocalist Olan Stephens, his new project, The Bedroom, aims to discover "what can be achieved within bedroom productions, both video and audio."

The result of this endeavor is something bizarre, otherworldly, and bordering on terrifying, if debut release "Basquiat" is anything to go by. The song is built around a saloon piano sample, which then morphs into a distorted IDM track that seems to have been salvaged from the deepest, darkest depths of Warp Records' back catalogue. The music video for the track keeps the oddness going, with Olan reciting the lyrics of the song which superimposed over a Jean-Michel Basquiat painting. It's a fairly interesting track, and is bound to be one of the most left-field electronic tracks to come out of Northern Ireland this year.

Posted by Christopher McBride at 13:27