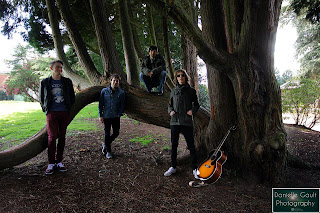 There really aren't many groups from Northern Ireland who have been influenced by Britpop, which is not surprising given how few acts from here broke through during the mid 90s. Aside from Ash, who  are usually given a place in the Britpop canon, there's The Divine Comedy, whose music seemed much more grandiose than the confines of the label, and at a stretch Joyrider, who had their only hit with a punk-pop cover of "Rush Hour" in 1996.

One act from here who do appear to wear their Britpop influences on their sleeve are Belfast four piece Echo Raptors. Having released a couple of decent stand-alone tracks over the past few years, the band have released a new E.P this month. The lead track from it is "Change My Way", a song that would have gone down rather well had they played it live on TFI Friday. Reminiscent of Cast and The Verve, as well as channeling the influences of contemporary local group General Fiasco, it's an enjoyable little number.

The song is taken from the band's E.P "She's So Free", and is out now.